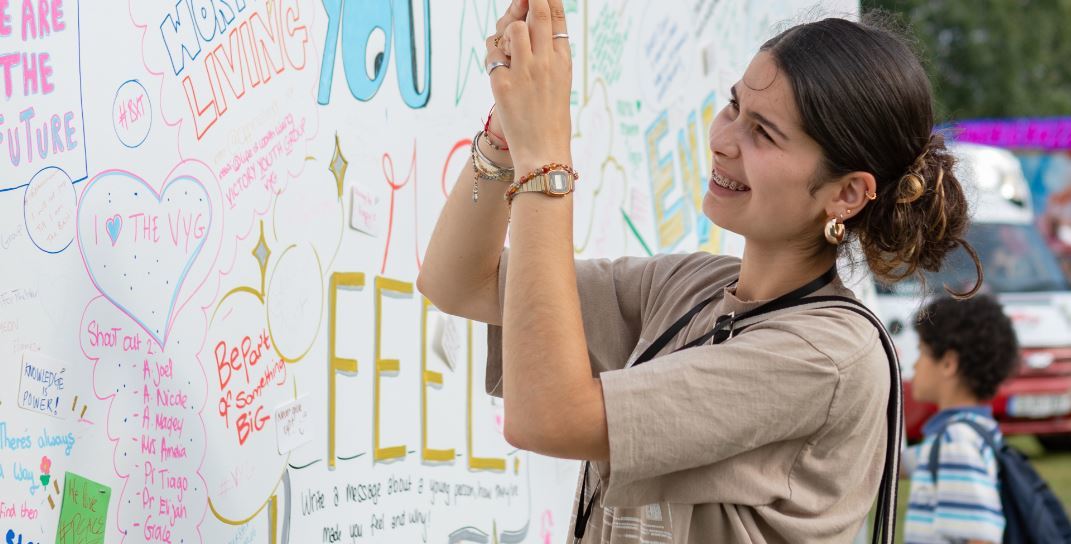 17-year-old musician and creative Khush Jandu Quiney writes a guest blog post about her experience being a part of the "InsideOut" project, organised by culture company Livity, at the Lambeth Country Show – a project aimed at engaging young people and reducing the knife crime rates in one of the most prolific areas of London for knife crime.

Earlier this year, it was reported that Lambeth’s grievous bodily harm offence figures were the highest amongst all other boroughs of London – averaging at almost three incidents per day. In response to this, Lambeth Council teamed up with Livity to try and reverse the negative rehtoric around young people in London. The participants of the "InsideOut" project, including Khush, are at risk or have been affected by violence and were tasked with constructing an installation at the Lambeth Country Show to tackle the negative rhetoric.

A couple of months ago, I was given the opportunity to work with Livity to organise a new branch of the annual Lambeth Country Show, one that was purely aimed at benefitting young people and tackling the stigma around being a young person in London.

The news often paints young people in a negative light, ignoring the achievements of young people both in London and all around the world… people truly trying to change the world. Hopefully, through our project, we could encourage the narrative around young people to be more positive, celebrating all the accomplishments that young people are achieving every day.

We put together a team to work on the project – on my team were some incredibly talented peers, including aspiring social workers, fashion designers, entrepreneurs and musicians. Having a wide range of young individuals from different backgrounds meant that we had a diverse range of input to the process which was really useful to everyone as we were able to explore new ideas that we may not have come up with otherwise.

YOUNG PEOPLE, ESPECIALLY THOSE FROM AN ETHNIC MINORITY, MAY FIND IT INTIMIDATING TO STEP INTO A WORKPLACE WHERE NOBODY LOOKS LIKE YOU

I think that people often underestimate how much the things that young people have to say can have the ability to really make a difference as we are so observant of our surroundings – this definitely wasn’t my experience on this project, or when we were working in Livity’s office in Brixton. I appreciated how there was a huge mixture of young people not so dissimilar to me and my friends, which I think is incredibly important. Young people, especially those from an ethnic minority, or less privileged background, may find it intimidating to step into a workplace where nobody looks like you or shares similar backgrounds or cultures. I think to see others like you in high positions in the workplace or just generally in life is so crucial to realising opportunities and how successful your potential is.

Over several weeks we planned the different sections that would feature within area of the Lambeth Country show – dubbed the “Inside Out Zone”.

Firstly, we had a huge marquee filled with young entrepreneurs selling their products. We had jewellery, tees, artists, writers, hair and skin products and many more quality goods that were up for grabs. One of the other key elements of our area was the stage and all the action that was happening on it – across the two days we had word artists, singer-songwriters, rappers and brass bands that graced the stage with their individual, prominent sounds. As the host of the show, I had great pleasure in presenting all of the acts and giving them the space to share their talents with the community.

I was also given the role of hosting the youth panel whereby I asked guest speakers Ciaran Thapar, Youth Worker and Writer; Lauren Hopkins, from Divert; Patrick Davis from Alford House Youth Club and Jaden Osei-Bonsu, LEAP Youth Worker about youth representation within the UK Media. The conversation during the panel was electric – discussions ranged from the impact of negative connotations of young people to drill music and government relations; these are conversations that should happen more often between young people and adults, but unfortunately do not.

Our final ingredient to our section were the art installations that we created. The first was a comment board in which we had the words: “YOU MAKE ME FEEL, tell a young person how they make you feel and why”. The idea was to get members of the public to create personalised messages, recognising instances whereby young people have made them feel a certain way, or what they would say to those individuals facing any struggles. At first people were more hesitant to get involved but by the evening we had huge crowds surrounding the board, with it being completely packet out with messages by the time the festival had finished. Reading all of the comments as well as speaking to everyone, kids and adults, was extremely moving.

Our second instalment was a newspaper cut-out style photo prop that had interchangeable headlines regarding young people. We had phrases like “young people need” followed by “love”, “support”, “opportunities”
etc… so that people could choose what they wanted the narrative to be. They were then able to stand inside the frame to take a picture. I thought that this was a really creative way of pushing the conversation out to social media to share these positive messages in addition to getting people interactive with the dialogue surrounding young people.

WHEN YOUNG PEOPLE AND ADULTS COME TOGETHER FOR PRODUCTIVE CONVERSATIONS, AMAZING THINGS CAN HAPPEN

Overall, I thought that this project was not only a massive hit at the festival but really offered my hard-working colleagues and I a huge amount of experience. Being so active for both days was tiring but I sincerely enjoyed every moment of it. I felt so proud as a young person, working with other young people to produce something that was so innovative while having such a powerful ethos behind it. I think that opportunities should be more frequent for young people as you do pick up so many skills as well as network with so many people that can uplift you in your career. It also proved that when young people and adults come together for productive conversations, amazing things can happen. I can only hope that we see more of this in the future.