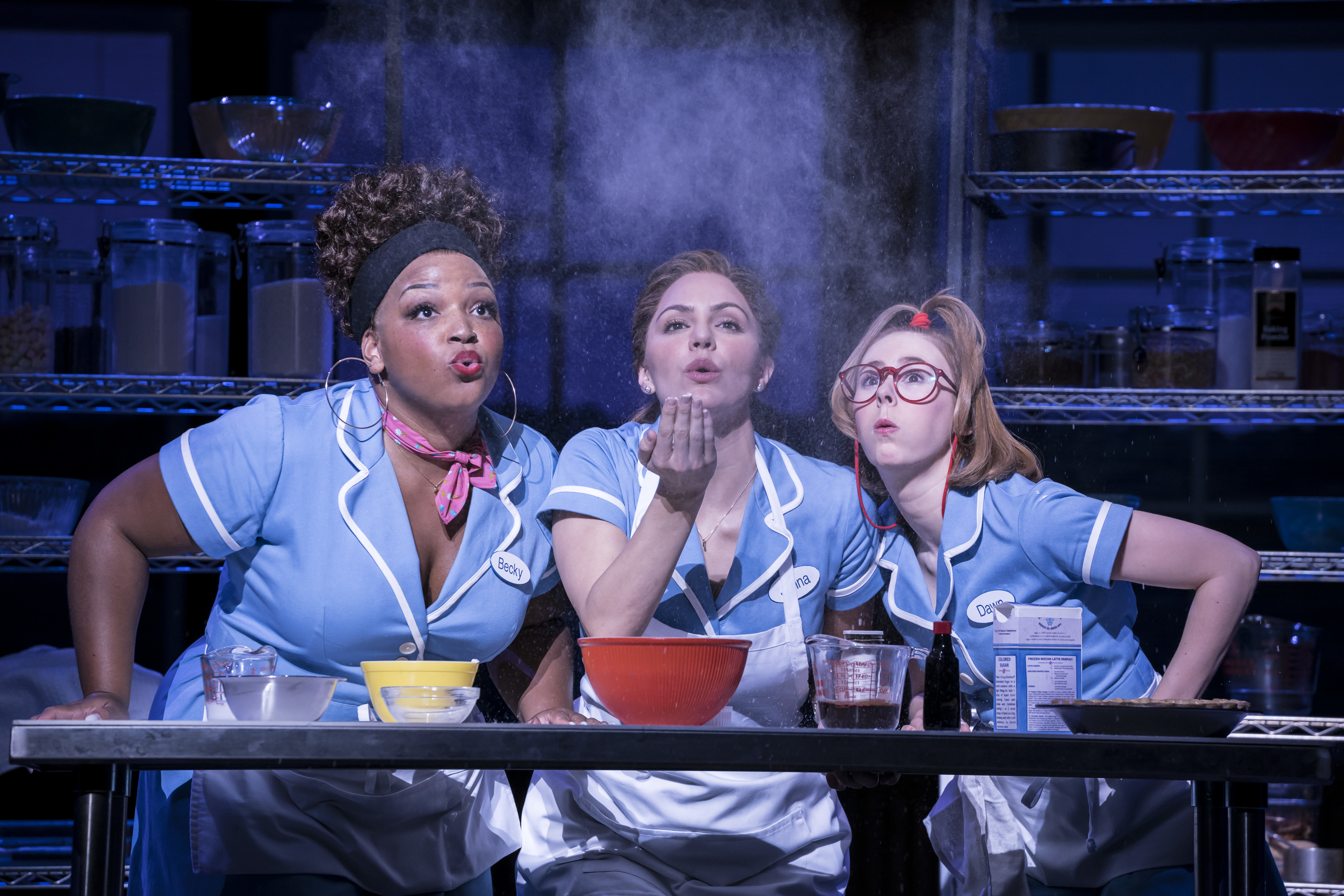 The latest Broadway export landing in London’s West End is the Sara Bareilles-penned Waitress – a new music about a waitress (obviously) and expert pie-maker who dreams her way out of her small town and rocky marriage… whilst plenty of new challenges and potential love interests block her path.

The musical is a fresh change to the West End – where so many other musicals follow the same topes and trends, Waitress doesn’t. In fact, it’s one of the only musicals in recent memory where the ending wasn’t entirely predictable by the interval!

Featuring an excellent cast – including American Idol runner-up Katharine McPhee who’s vocals are a stand-out feature of the production and comedic actor Jack McBrayer (best known from TV series “30 Rock”) – Waitress does not struggle to transport audiences to Jenna (McPhee)’s small town bakery… every second of the musical is as entertaining and believable as the last.

The music also doesn’t let down; 7-time Grammy nominee Sara Bareiles’ music and lyrics keep the storyline moving. Musically, the highlight of the show comes in the second act with “She Used To Be Mine” – an intimate and heart-breaking performance. Other than that, the only other memorable piece of music is opener “Opening Up”.

Whilst there are incredible smelling pies (we don’t know if it’s just our brain playing tricks on us but we really could smell some of the pies being “baked” on stage!), a surprising storyline and impressive vocals, Waitress does face pitfalls. The complex storyline is slightly difficult to follow at first and the lack of memorable songs doesn’t provide the “humming along” value as you leave the theatre. However, the ending did nearly have us in tears (of happiness!)… so we weren’t quite in the mood for singing anyway!

If Waitress is a sign of things to come in the West End, then the long-standing musicals should be worried. It’s modern, it’s funny and it’s meaningful – and isn’t that all we want from entertainment nowadays?! Audiences are undoubtedly going to be leaving the theatre with a slice of “Sweet and Fulfilling Jammy Musical Pie”.

Just a Tip | Mayor of Negative Town (with Zack Bornstein)
Switched On Pop | Billie Eilish is a Different Kind of Pop Star
Alec Feldman: I Could Get Used To This
James Gilmore saw &#039;Hair&#039; with his parents
Hot in Theatre
Review: Derren Brown: Secret on Broadway
The American audience at SECRET, now running at the Cort Theater, may be new to Brown’s work. But one thing’s for sure, they will all leave as fans.
Review: Everybody's Talking About Jamie
Layton Williams steals the show in the refreshingly modern production about the boy with dreams of being a drag queen!
Review: The Secret Diary of Adrian Mole Aged 13 3/4
An enjoyable evening – one that puts you through ALL the emotions and is a totally honest portrayal of teenage life.
Review: Waitress The Musical
The Katharine McPhee and Jack McBrayer-starring music will undoubtedly leave audiences at the Adelphi Theatre in London with a slice of “Sweet and Fulfilling Jammy Musical Pie”.