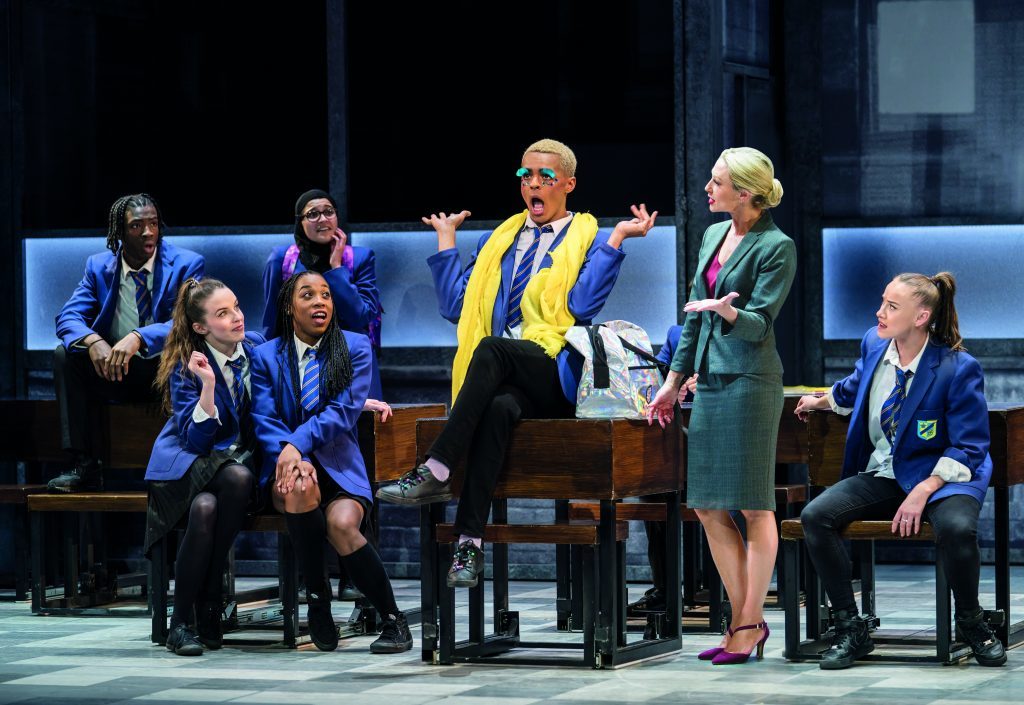 Have you heard about the West End show that everybody’s talking about!

The story of Jamie New, the 16-year-old Sheffield student who dreams of being a drag queen, even though his school guidance counsellor, father and, of course, the bullies don’t have the same idea as him. But, he’s not going to let that get in his way.

Based on the real life of Jamie Campbell (which was captured in the BBC Three documentary “Jamie: Drag Queen at 16), “Everybody’s Talking About Jamie” doesn’t leave much room for sympathy. This loud and proud production, with music by The Feeling frontman Dan Gillespie Sells and book and lyrics by Doctor Who writer Tom MacRae, is one of the most refreshing and enjoyable shows currently in the West End.

Everything from the set design and use of projections, to the pop-ballad music and outstanding acting makes “Everybody’s Talking About Jamie” the perfect production to tell this crucially modern story. If you’ve seen the BBC documentary there are some quotable references in there too (“It boils my piss!”).

Whilst everybody may be talking about Jamie right now, everybody should really be talking about Layton Williams – the “Billy Elliot” and “Bad Education” (BBC) star currently in the main role as Jamie New. As much as the production’s story telling is gripping, so is Layton’s performance, outdoing himself in each scene and absolutely stealing the show in every positive way.

With a film adaptation in the works, it’s clear that Jamie’s journey has truly on just begun. You can’t help but feel uplifted as you leave the theatre and obsessed with seeing how Jamie’s story progresses in the real world. It’s truly a shining light of what is possible when an important story, with modern values, and great songs come together.

Review: The Secret Diary of Adrian Mole Aged 13 3/4
Review: Waitress The Musical
Review: Wicked
Hot in Theatre
Review: Derren Brown: Secret on Broadway
The American audience at SECRET, now running at the Cort Theater, may be new to Brown’s work. But one thing’s for sure, they will all leave as fans.
Review: Everybody's Talking About Jamie
Layton Williams steals the show in the refreshingly modern production about the boy with dreams of being a drag queen!
Review: The Secret Diary of Adrian Mole Aged 13 3/4
An enjoyable evening – one that puts you through ALL the emotions and is a totally honest portrayal of teenage life.
Review: Waitress The Musical
The Katharine McPhee and Jack McBrayer-starring music will undoubtedly leave audiences at the Adelphi Theatre in London with a slice of “Sweet and Fulfilling Jammy Musical Pie”.