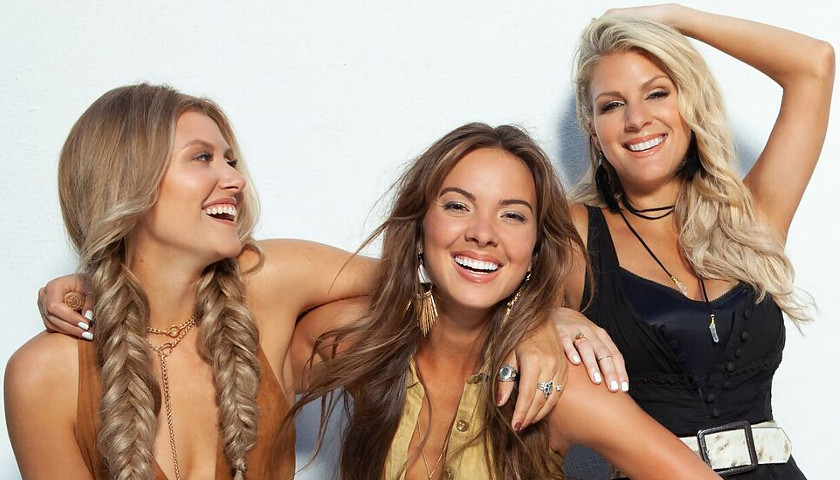 How could we NOT make Runaway June our Rising Country artist in the month of June?!

Runaway June are Naomi Cooke, Hannah Mulholland and Jennifer Wayne (yes, John Wayne is her grandfather!). They first met during a songwriting session in Nashville and instantly hit it off, writing their debut single “Lipstick” together which would become the first Top 25 Single for a female trio in over a decade in 2017

Following the success of “Lipstick”, the ladies released their self-titled debut EP in September 2018, which features hits such as “Wild West” and “Buy My Own Drinks”, the latter being the first song by a female trio to enter the US Country Top 20 charts in over 14 years.

The ladies are currently out on the road touring with Carrie Underwood on her Cry Pretty Tour 360 along with Maddie & Tae, the only all-female country tour this summer.

Naomi told Madeleine Molly back in March that they couldn’t wait to get on the road with one of their idols: “Carrie is just such a great example of someone who’s handled immense stardom so well and with so much grace. It’s just going to be the opportunity of a lifetime to get to go out and get to see how she does it…” To which Hannah piped in: “…and steal her secrets!”

Madeleine Molly sat down with Runaway June to talk about all things from casting their mini-mes in their ‘Buy My Own Drinks’ music video to being compared to the Dixie Chicks.

Interview with Abby Anderson
Interview with Jimmie Allen
Interview with FLETCHER
Interview with RaeLynn
Interview with AJR
Hot in Music
Punch Up The Jam | i2i from A Goofy Movie (with Chris Fleming)
Every week, comedian/musician Miel Bredouw teams up with a special guest to revisit, review and revise the songs of our yesterdays, yestermonths or even (dare we) yesteryears.
Interview with Gracie Abrams
Gracie Abrams’ music just hits differently. The artist sits down for an in-depth interview covering everything from her music to wanting to be stabbed in the heart.
Interview with Avenue Beat
Meet Avenue Beat: three women from Quincy, Illinois who sing about having anxiety and not liking your boyfriend… and are W!ZARD Radio’s Rising Country artists this May.
Switched On Pop | Carly Rae Jepsen: Meeting The Muse
A podcast breaking down the music of pop hits.